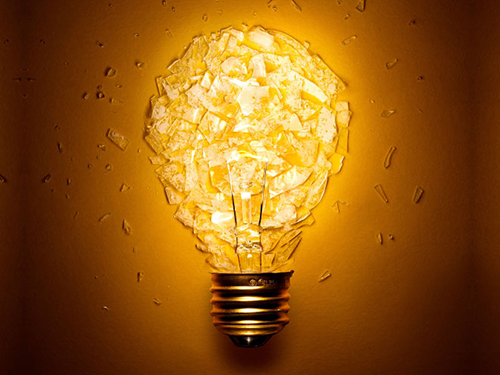 Studies have suggested that energy management strategies are vital to the overall financial condition of an organisations. Deloitte combined with market research and strategy firm harrison to create the detailed fifth annual nationwide recourses study. This study discussed the connection between efficient energy management and profit generation in more detail

Some companies have been shrewd in installing energy management strategies which aim to decrease the amount of energy accumulated. Evidence suggests that this strategic approach to energy reduction contributes to many financial advantages both for owners and investors. There has been a number of financial and energy analysts, companies and private investors who believe in this theory and have accepted the fact that good sufficient energy management has a direct influence to the profit in which an organisations generates.

Statistically speaking in the US 79% of companies in 2015 have suggested that the reduction of electricity cost is essential in reducing expenses and staying financially competitive. Interestingly, recent research from three economist, tow from hazard and one in the London school of economics attempted to find out the truth behind this relationship of profit and sustainable energy management. The researchers asked 90 companies all operating in the same sector and of the same size and capital power. 50% of the companies instilled a sustainable energy strategy with a look at long term investment and 50% didn't. The results showed that those who did would see their $1 (£0.63) invested turn into $22.60 (£14.33) in a 16 year span in comparison to $15.40 (£9.76) for companies who failed to do so.

Specifically speaking the the telegraph posted an article written by Richard Evans (11 Apr 2014) suggesting that LED light bulbs can save a costumer £240 a year. It also has the capability of paying for itself after just 5 months.

LED bulbs are 10 times more efficient than your standard filament bulb and has the ability to change light into electricity more efficiently. This is showcased by the difference in the amount of wattage needed to operate the lightbulb. For an example a master LED spot MV value bulb only uses 4.3W and is equivalent to 50W.

LED lighting solutions and energy management control systems are new technologies that can be easily installed and can dramatically reduce your expenses. This will have an influence in your financial capability and ultimately increase your profit.

This blog post was adapted from:
Deloitte reSources 2015 study; Energy management passes the point of no return
the telegraph 11 Apr 2014; Richard Evans.

Scientists have found a way to make LEDs even more energy efficient! 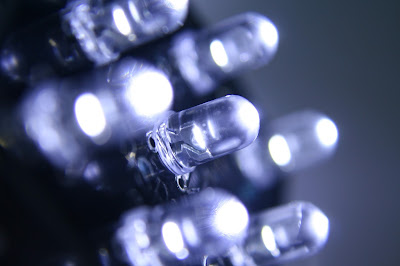 We all know that LEDs can do wonders for our energy bills and help us reduce our carbon footprint but some people are reluctant to pay out the initial cost for the long term investment that LEDs are. Hopefully this is all about to change.

Scientists at Rutgers University in New Jersey, USA are leading research to find a more sustainable and cheaper white LED. Although LEDs are everywhere now, more widespread use of the technology is limited due to the cost of the raw materials used to manufacture them and issues with light output.
Researchers at Rutgers University have hoping to overcome these obstacles. Currently, the soft white colour that can be achieved in an LED is a blue coloured LED chip with a phosphor coating, this is how warmer colours of LEDs are created. This coating is made from materials which are composed of rare-earth elements, these elements are in short supply and are expensive.

The research team at Rutgers University, led by Jing Li, is developing a hybrid phosphor based technology that will be much more sustainable, efficient and of a lower cost. This hybrid will use common and earth-abundant metals with organic luminescent molecules which will make it much easier to control the light that is created from the LED.

This new research will hopefully bring down the already drastically falling price of LEDs so that more people will make the change to LED. Zhichao Hu, a member of Li's team has commented that,  'if more people in the US used LEDs in their homes and businesses, the country's electricity consumption could be cut in half.' He added that studies have shown that if every American house hold swapped one incandescent lamp for an LED it could save the country a staggering $700 million in annual energy costs.

This shows the significant impact LEDs can have not just on our own energy bills but those of the world, perhaps if this new research brings out a change in the cost of LEDs, the world will be a much more energy efficient place, sooner than we had hoped.


This blog post was adapted from http://phys.org/news/2015-08-technology-energy-greenhouse-gas-emissions.html . August 19th, 2015

New Safety Benefits of LEDs and the Internet of Everything

The internet of everything is becoming increasingly discussed as the future of our society, in previous blogs we have explored how LEDs fits into this digital world but now it has been discovered that LEDs and the industrial internet can be used to benefit our safety.


Designs that combine LEDs with wireless sensors and data-transmitting technology have been successfully implemented for safety uses in cities in Brazil and Spain.
The Brazilian city of Bauru, hometown of the famous football player Pelé, in the state of Sao Paolo is one of Brazil's most densely populated centres with extremely high volumes of traffic. These issues are cause for concern in the UN 'decade for Action for Road Safety 2011-20'. The purpose of this foundation is to reduce the ever increasing numbers of traffic fatalities and to save five million lives in the ten year period.
Obviously good lighting is crucial in this so in 2013 Bauru partnered with lighting company GE to convert over 2,000 traffic lights to LED. These LED signals last ten times longer than the traditional lights used and reduce energy consumption by up to 80%. In terms of safety for road users, these LED traffic lights produce greater visibility and clearer colours, this reduces risk of drivers being distracted by the intense Brazilian sunlight. There are nearly 3,400 traffic accidents in the world every day but Bauru and GE's contribution is helping to bring that figure down, perhaps other cities in the world should follow their lead.
Not only could LEDs reduce the amount of traffic accidents, the introduction of wireless sensored infrastructures is able to give advance warnings of natural disasters. Although this is a problem that doesn't really enter our day to day concerns in Britain, the reality is that in the last 25 years there has been a staggering 850,000 deaths in the world due to natural disasters. This amounts to $3,300 billion in economic damage, a figure that's pretty incomprehensible.
The the Rockefeller Foundation's 100 Resilient Cities initiative is a campaign created to help cities around the world become more resilient to the physical, social, and economic challenges that are a growing of our modern society. As part of this initiative the La Garrotxa region in Spain is devoting itself to reduce the death toll of natural disasters by developing a daily monitoring system that will provide early earthquake and flood warnings. La Garrotxa is located to the northeast of Barcelona and between the Mediterranean and the Pyranees and is known for its volcanic landscape. It has become one of the first test sites for this new kind of early warning system. This new technology uses Wifi and 40 different types of environmental sensors managed through a dashboard and enables local officials to monitor local river levels for early signs of flooding and can also measure temperature, humidity, carbon dioxide and carbon monoxide levels which could be used to detect forest fires which the area is prone to. These examples show the possible safety features of LEDs and wireless technologies that could be employed within fire and police departments in addition to government offices. Making our infrastructures more sophisticated will allow us to transmit crucial data at the speed of light, creating safer cities and a safer world.

The newest product to be added to the Philips lighting range is the 5.4W Master GU10, this is new 50W equivalent that supersedes the  extremely popular Philips Master 5.5W GU10. In addition to the superb new design of this lamp, this 'upgrade' also offers a longer lifetime, a better colour and a higher lumen output for a lesser wattage. 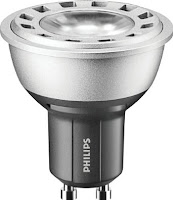 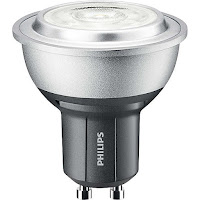 So, the main differences between these two lamps is the increase in lifetime, the higher lumens, the new design and the new colour of 930 instead of 830. The colour 930 is considered a much better colour due to it being higher up the colour spectrum. With all specification taken into account, we can safely say that this new 5.4W GU10 is a much better product than the 5.5W GU10 it has superseded.

We currently have in stock the 5.4W GU10 in colour 940 40, please click here to order. The other colours and degree beams are available for pre-order. Please email sales@theledspecialist.co.uk or call us on 0118 950 7125.