The LED Specialist's End of The Month Offer 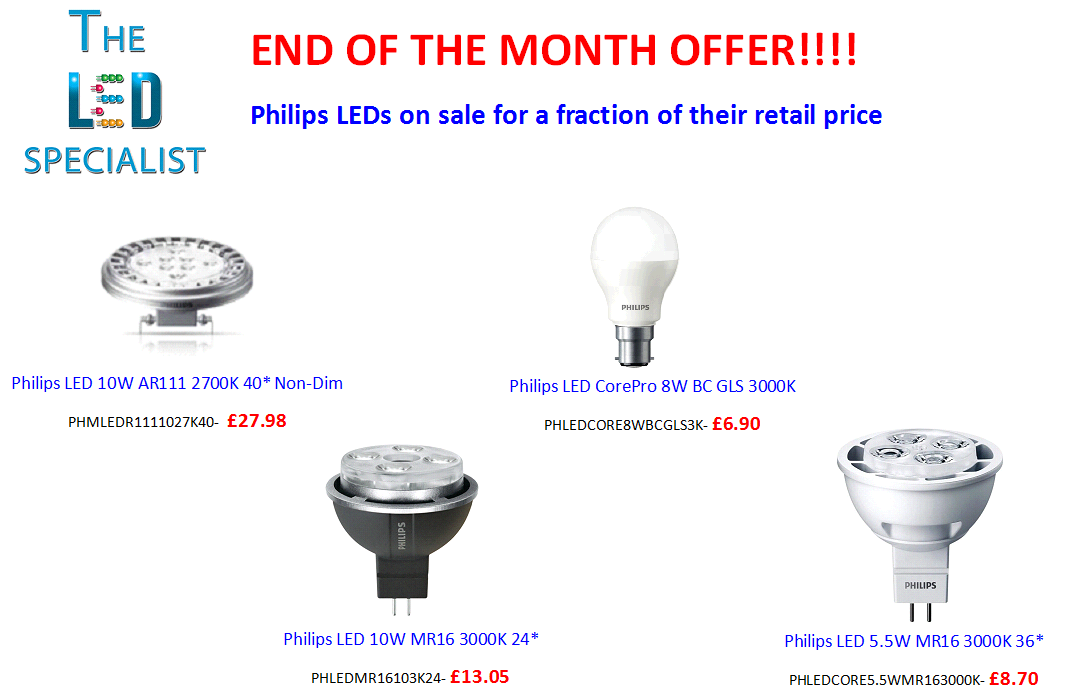 Philips' CoreLine Wall Mounted is the clear choice for LED lighting. Whether for a new building or renovation of an existing space, customers want lighting solutions that provide quality of light and substantial energy and maintenance savings. The new CoreLine Wall-mounted range of LED products can be used to replace traditional wall-mounted luminaires incorporating compact fluorescent lamps. The process of selecting, installing and maintaining is so easy – it’s a simple switch. 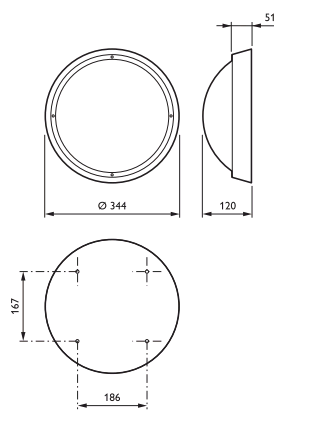 All iColor Flex gen2 nodes on the flexible strand is individually controllable, providing the ultimate flexibility in lighting design and ambiance. The flexible strings fit nearly any architecture meaning they are suitable for all kinds of application. The flexibility offered by iColor Flex gen2 luminaires is current unrivalled, enabling users to customize node count and spacing. In comparison to their predecessor, iColor Flex gen1, the gen2 luminaires offer twice the brightness using the same power level.

These luminaires offer superior light output of up to 2.6 candelas. They have multiple lens options, including both clear and translucent domes. The strands can be mounted directly to a surface much like traditional string lights. The iColor Flex gen2 luminaires are compatible with most industry leading controls including Philips' Video System Manager Pro, Light System Manager, and iPlayer 3.

The iColor Flex gen2 comes in two options: iColor Flex MX gen2 and iColor Flex LMX gen2. Below is a table of thier specifications provided by Philips lighting. 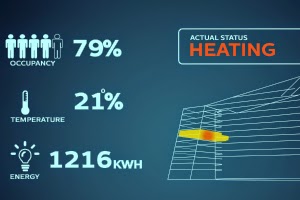 Philips’ Sensor-Ready system uses LEDs which are powered over Ethernet; the system provides building owners and facility managers a plethora of useful data about their properties.

After the positive feedback Philips received about their Li-Fi system for retail stores, the Dutch conglomerate unveiled this clever indoor lighting solution for the office.

At the Light +Building show in Frankfurt, Germany, Philips proudly displayed their connected office -lighting system. The system’s LEDs are wired up to the buildings IT network, power is provided by the Ethernet which produces just enough juice for low power LEDs, the system can also include sensors for monitoring humidity and temperature, as well as for judging when a room is occupied or not.

Similar to Li-Fi, the lights can also act as a positioning grid helping people navigate the office layout. The lights again are able to communicate through a downloadable smartphone app, the fixtures can track the user’s whereabouts and help recommend for example the nearest vacant meeting room. Using the app, staff are able to easily adjust the lighting and temperature of the room they’re in via Philips’ office lighting app.

This innovative system enables building owners and facility managers to measure occupancy levels and energy usage, Philips’ software displays these is an easy to read format ensuring consumers benefit from all aspects of the connected lighting system. Using information collected by the app, managers and owners can easily decide when certain area need to be heated, how often specific rooms need cleaning and which rooms need to be lit and when.

When asked about the benefits of this lighting system, Philips spokesman Menno Kleingeld said: “It’s gathering a large database of information for various fixtures for facility managers, to make their life easier.” He went on to discuss how in addition to the energy saving benefits, the system may also provide a security benefit by sensing when someone is in a room which should not be occupied.

For more information on this lighting system or for any further information on LED lighting products visit our website http://theledspecialist.co.uk/ or call the office to speak to one of our highly skilled sales team 0118 939 3218
Posted by Unknown at 08:10 No comments: 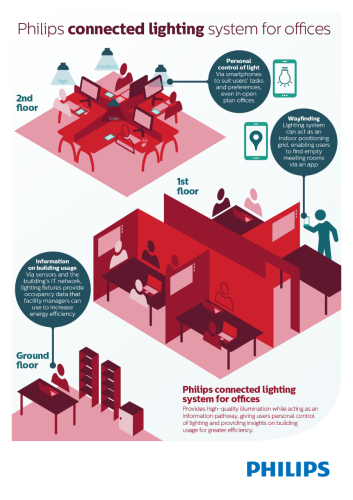 
When evaluating LED luminaire performance claims it is important to compare a standardised set of quality criteria measured in compliance with the appropriate standard.

These quality criteria are designed to ensure that performance claims can be matched
against traceable data.

This data is summarised below:

The IEC has developed a list of performance requirements for both LED modules and LED luminaires. These provide a set of quality criteria related to the initial specifications of a product and a standardised description on how to measure these quality criteria.


Following this proposed criteria allows you to easily compare manufacturers claims of initial specifications of LED modules and luminaires.

The rated input power shows the amount of energy consumed by a luminaire, including its power supply.


It is expressed in watts.

This is the light emitted by the luminaire which is expressed in lumens.

For traditional luminaires it is usual that Relative values are measured and multiplied by the lamp flux.

Although white light is a mixture of colours, not all whites are the same since they depend on their constituent colours.

In order to classify the different types of white light, the concept of colour temperature is applied which is described as the colour impression of a perfect black-body radiator at certain temperatures.

This concept can be best explained with the help of familiar thermal radiators like the filament of an incandescent lamp or an iron bar.

The higher the colour temperature, the cooler the perception of the white light becomes.

It is expressed in kelvin.

Although light source may have the same colour appearance, this doesn’t necessarily mean that coloured surfaces will look the same under them.

Two lights that seem to have the same white colour appearance may be the result of different blends of wavelengths.

As a result a given material may appear differently since the surface may not reflect the constituent wavelengths by the same extent.

Its colour appearance will change when it is exposed to one or other light. So, colour rendering is an important criterion when selecting light sources for lighting application solutions.

With new LED technology coming in, with a narrow spectrum, the CRI index is not in all circumstances giving a fair representation of the colour appearance.

New definitions and methods for measuring are currently under development in CIE.

The initial CRI value classification for the photometric code can be obtained by using the following intervals:
Quality Criteria- Lumen Maintenance Code

As the typical life of a LED luminaire is very long, it is time-consuming to measure the actual lumen reduction over life.

Also the actual LED behaviour with regard to lumen-maintenance may differ considerably by type and manufacturer.

It is not possible to express the lumen-maintenance of all LEDs in simple mathematical relations. A fast initial decrease in lumen output does not automatically imply that a particular LED will not make its rated life.

In order to validate a life time claim an extrapolation of test data is needed. In the IEC a general method of projecting measurement data beyond limited test time is under consideration.

In the US an extrapolation based on LM-80 test data be described in IES TM-21. Instead of life time validation, the IEC/PAS has opted for lumen maintenance codes at a defined finite test time.

Therefore the code number does not imply a prediction of achievable life time. The maintained luminous flux is measured at 25% of rated life time up to a maximum of 6,000 hours and expressed as a percentage of the initial value.

A six digit photometric code that displays the important ‘quality of light’ parameters.

The length of time expressed in hours, during which a population of LED modules provides more than the claimed percentage (x) of the initial luminous flux always published in combination with the failure fraction.

Quality Control- Failure Fraction (Fy), corresponding to the rated life of the LED module in the luminaire

The percentage (y) of a number of LED modules of the same type at their rated life that have failed.

This failure fraction expresses the combined effect of all componenets of a module including mechanical, as far as the light output is concerned.

It is possible to specify performance claims at different ambient temperatures.

If the LED luminaire is to be used at an ambient temperature different to that at which it was tested, correction factors will need to be applied to the performance criteria.

It is expressed in degrees Celsius.

The power factor should be clearly stated in all cases.

Although product standards may not require this below 26w, it should be noted that some clients, and in particular contractors and local authorities working with un-metered supplies, will require power factor correction of 0.85 or better.

Absolute Photometry does not require the use of a separate lumen output for the light source.

Relative Photometry requires the LED package flux to be quoted.

Both methods produce the same result. For LED luminaires Absolute photometry shall be used.

Absolute photometry of LED luminaires should be conducted according to IES LM-79-08 Photometric Measurements of Solid-State Lighting Products.

Relative photometry should be conducted according to EN13032-1 (2004) Light and lighting Measurement and presentation of photometric data of lamps and luminaires- Part1: Measurement and file format.

Photometric results that are calculated by deviation from the tested sample by the use, for example of higher or lower drive currents or dies from bins other than the bin used for the tested device are to be clearly identified as such.

Correction factors used are to be provided with the results.

Normally around 350mA is quoted but this can be higher. The higher the LED is driven the brighter it will be but it may have a shorter operation lifetime and be less efficient. Some of the new multi die LEDs are designed to operate and perform at higher drive currents.

Declaration of the drive current is important when remote drivers are used.

These regulations require employers to protect the eyes and skin of workers from exposure to hazardous sources of artificial optical radiation.

When light sources are placed in a luminaire, the Risk Group classification can change due to the optics used in the luminaire.