Unlike lifetime based on luminaire maintenance, lifetime of the luminaire has to do with the reliability of the components of a LED luminaire as system. 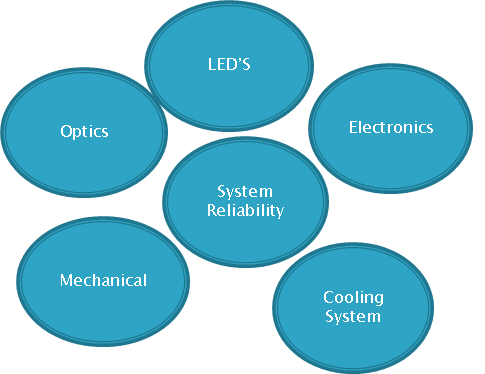 LEDs do not radiate heat however, in current products half or more of the input energy must be converted into heat that must be conducted away from diodes.

The use of reflectors, lenses and diffusers allows a designer to direct light in many different ways.

The efficiency and depreciation of the optical system must be considered and factored into the overall efficiency of the luminaire.

The mechanical integrity of a luminaire is important in several different areas including: IP rating to suit the application, heat sinking that will not become compromised with time, lack of maintenance vibration resistance so the heat sink does not become detached from the PCB, bonding mechanisms that are suitable for the life of the luminaire.

Many LEDs and specifically phosphor can react to different chemicals. Some gaskets can out-gas chemicals which can affect the performance of some LEDs.

The performance of a LED is dependant on its temperature during operation.

The design of the luminaire will influence its operating temperature and hence published characteristics.

The paint finish or fixture colour may affect the heat dissipation from the luminaire.

A PCB is the interface between a LED and the heat sink and has a thermal resistance value.

The higher the resistance the less efficient the system is at conducting away heat from the LED.

This may well impact on the LED lumen output performance and ultimately its life.

Electrical overstress is a cause of catastrophic failure of LEDs.

Some LEDs contain an on board Transient Voltage Suppression chip (TVS), which provides some level of protection.

A well designed lamp will feature the necessary design or protection in order to minimise damage at installation or power-up.

Failure rate of the external control gear shall be included in the overall assessment of total life/failure rate.

LED light sources are simply one critical component among many, although they are often the most reliable component in the whole system.

How To Verify Lifetime Claims

In most cases, the reliability of LED luminaires is longer than the practical test times, verification of manufacturer’s life time claims need to be made in a sufficiently confident way.

In order to validate a lifetime claim, an extrapolation of test data is needed. There is no validated way to translate the lumen maintenance curve of an individual LED light source into a curve for the LED module or LED luminaire.

Beyond the 10,000 hours testing recommended by LM-80, statistical predictions are made. If LED light source data is available for 6000 hours, LED modules and LED luminaires may have life testing carried out for just 2000 hours!